Skip to the content
Sales Event: Up to 30% Off MSRP
Home » ATV Swisher Log Skidder (22020)
Skip to product information
Swisher

Due to rising fuel costs and lack of space on shipping trucks the costs in certain areas have been affected. An "out of area" fee may be necessary. If additional funds are required to fulfill your order we will reach out to you after your order is placed and give you options including possible terminal pick up. (Read more about our shipping policy and how freight shipping works.)

Some (not all) of the products we carry can potentially expose you to chemicals including Benzene and Carbon Monoxide, which are known to the State of California to cause cancer and birth defects or other reproductive harms. If you have any questions you can always contact us. Very happy with this log skidder. It is light enough for single-person use, hooking up to the truck or tractor and moving it around for storage by hand. But also strong enough to haul logs; 20" diameter, 10ft long, no problem. The winch is excellent, not just for lifting the front of the log for transportation, but to pull the log to the skidder, too. The tong is good size, and grips without fail. I use it in combination with a yard glider under the log, hooked to the skidder's chain hooks, to further reduce drag. Highly recommended. 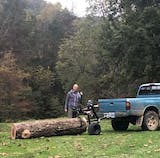 Granted, at this time - I have not had a chance to use the actual log skidder; however, I just wanted to share some feedback on both Wood Splitters and Swisher. First off, the ordering process was quick and unit shipped in no time and arrived within a week at a great price!! About half of MSRP and several hundred below other online vendors. Second, upon arrival - there was some minor damage to the hardware bag, which caused a few of the bolts, nuts and spacers to fall out. No other damage to the unit. I reached out to Wood Splitters and response within a few minutes saying they would get in touch with Swisher to get the replacement parts on order. This was a Friday, on Monday Swisher reached out to clarify the missing parts (since I messed up the list myself, so it confused them understandably). Parts arrived two days later and the unit is up and ready to go. In looking over the skidder, it is definitely well made and powder coating has no visible issues. This thing weighs in about 220 pounds, in comparison to 70 for a similar unit sold by Northern Tools. If I have any issues, I'll update this review - but for now, I'm not expecting anything to report but more good things!! :-)